I was sitting outside the tent eating my power bar waiting for my aunt and cousin to wake up. I had my hat on and could not see up above me but I noticed my neighbor’s shoes were pointed in my direction. I tilted my head up and he was about to take my picture. I said, “You are going to take a picture of me?” and he said, “Yes. I have to get a picture of my surroundings and my neighbors.” I smiled at him, he took the picture and I kept on eating my power bar. They (3 couples) were from Canada. I also spotted the head hanging from the tree. Not as creepy during the day. Oh and every morning when we woke up, there was a different person sleeping on the ground on the side of our tent. 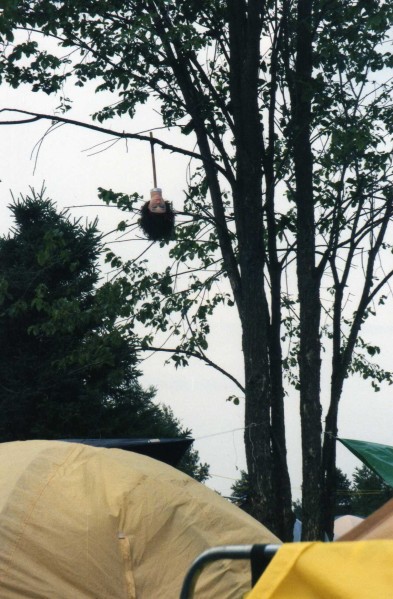 Once my aunt woke up, she was telling me how she overheard our neighbors talking last night. One guy told his friends that he had thrown his shoes during Korn’s set and his girlfriend said, “You threw your own shoes?” “Yes.” But then he found two shoes that fit each foot, so he wore those!

Once again, we headed to the bathrooms. Prior to that, I overheard our neighbors say the line for the showers was an hour wait and you had to stand in 4 inches of water. No thanks! Besides, I came prepared! Once again, there were tons of people by the sinks either brushing, washing or girls shaving. It was wild. Oh and many guys were taking pics of chics with wet shirts on! Men are pigs! haha

Back at the tent we changed clothes and headed for the East stage. It took us ONE HOUR to walk to that stage. As we passed The Emerging Artist stage, some people had taken the garbage cans, turned them on their sides and were beating them like drums. From that point on, every time we walked past them, they were being played by all sorts of people. 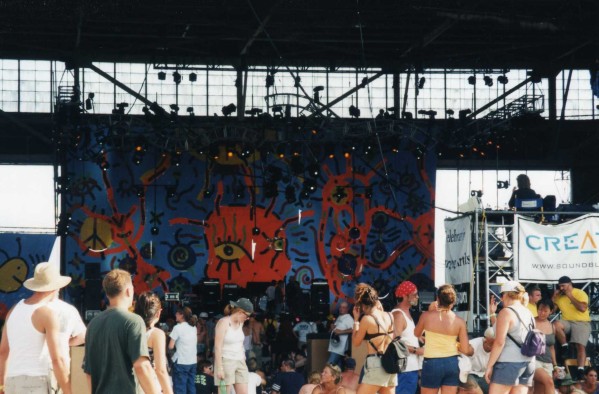 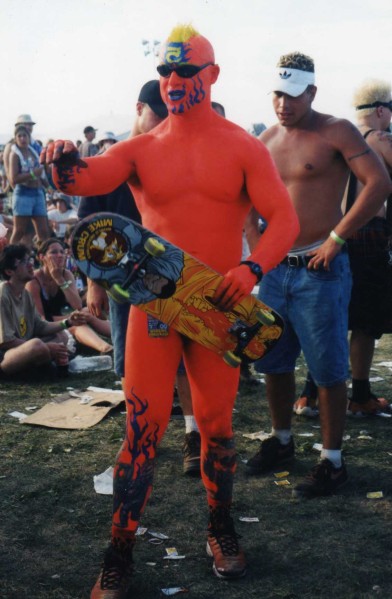 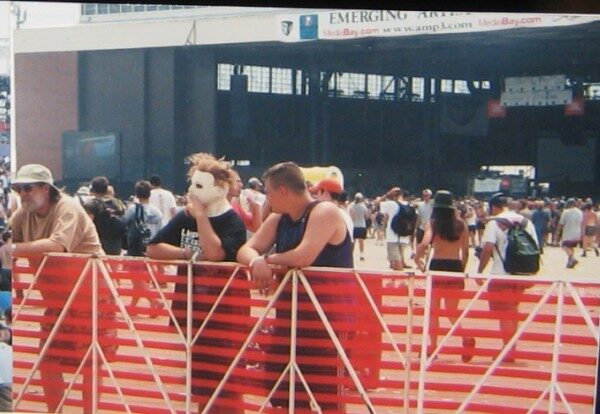 Michael was at Woodstock too 😉 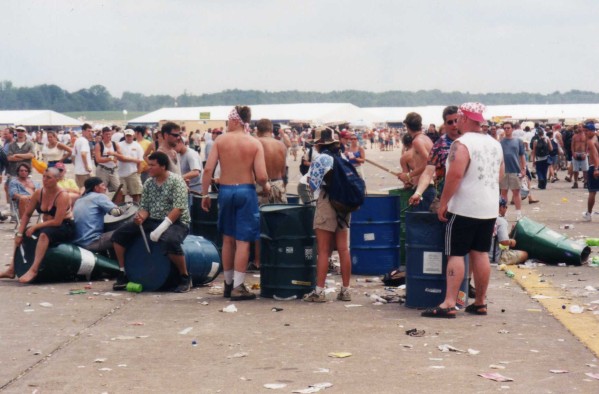 I just want to bang on the drum all day 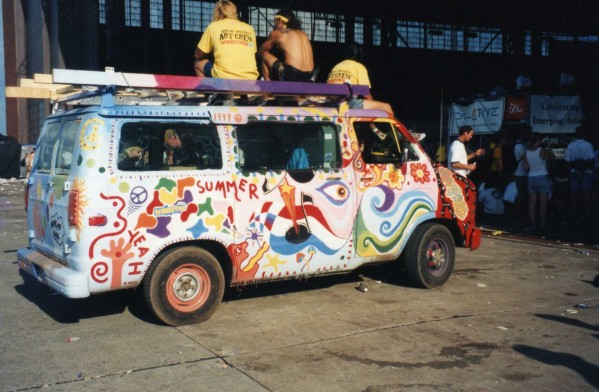 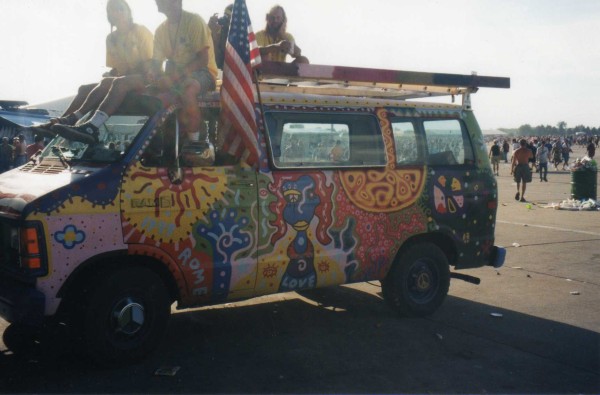 We also found a U.S. Mail service on the grounds. I bought a Woodstock postcard and mailed it to my hubby and son and my aunt sent home items she had bought. 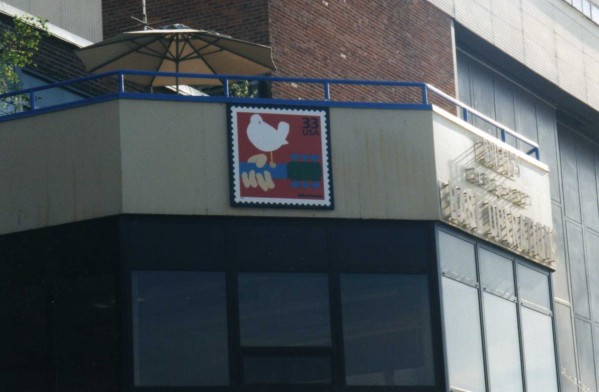 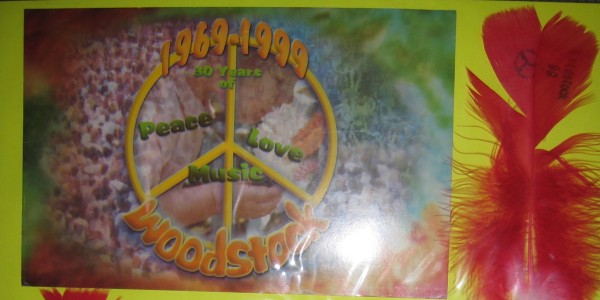 The Woodstock postcard I mailed home and a feather I found

As we headed over to the East Stage field, there was a huge back up of people trying to get to the bathrooms because the field was nothing but mud. They were slowly walking across skids to avoid getting muddy. Since I have no patience I started walking through the mud. Remember, I was still barefoot. I washed my feet once I was across! 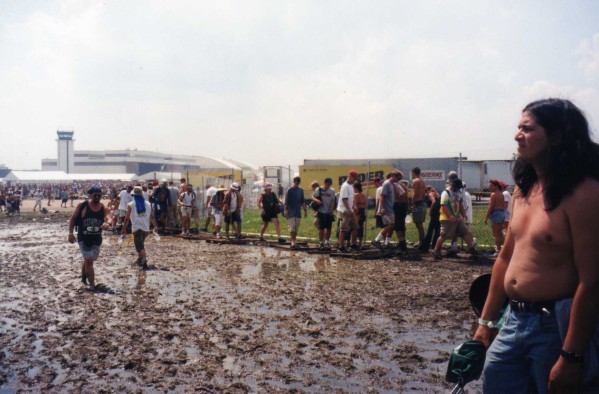 I walked through that mud, barefoot, without slipping 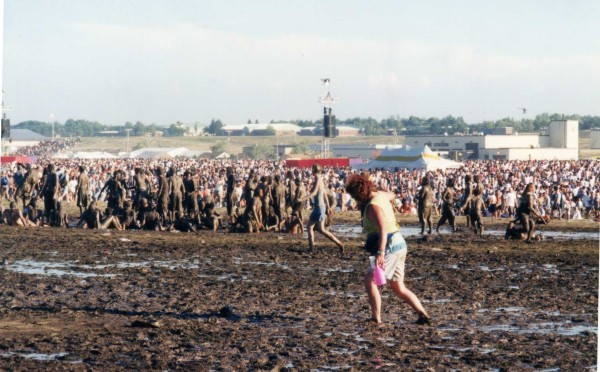 Other crazy looking people I saw: a naked man with his dreads pulled up in a pony tail walking around with a hula hoop, a tall skinny black man with big hair wearing only white briefs and a black fanny pack. At one point, two half naked chicks sat about 10 feet from us. It got really boring after a while. I wish I had a dollar for every guy who took their picture. Again, men are pigs! haha I saw a large black man who was wearing a duck towel on his head. I saw lots of crazy looking hats: a guy wearing a hat with Moose antlers, a santa hat with Metallica written on it, a large blue fur hat with yellow horns, big sombrero hats, a large yellow foam cowboy hat and a large fur hat.

We also came across two very old men, one was in a wheel chair. They looked like they might have been at the original Woodstock (I wish I would have asked them). One of them was wearing the coolest pants which had patches all over them. 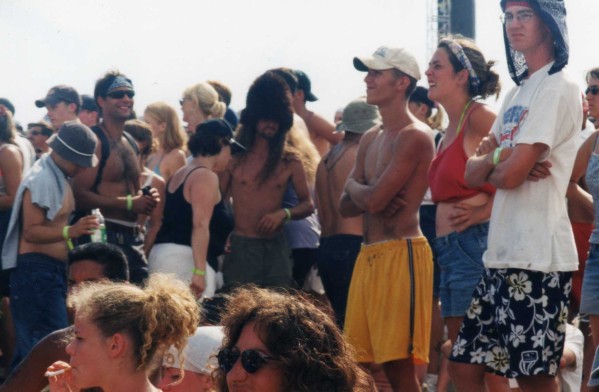 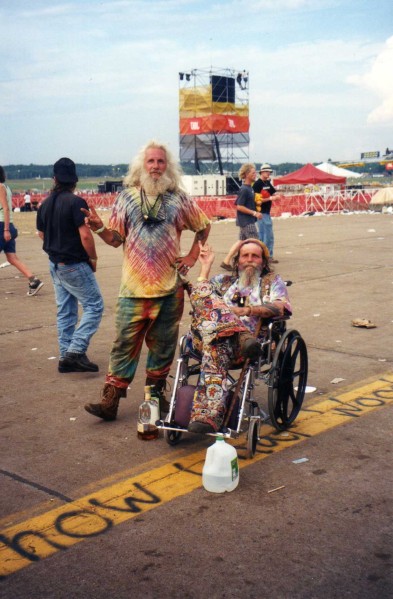 We saw a dog and heard someone brought a cat. Lots of people had Frisbees and hackey sacks, beach balls, balloons and blown up condoms. I saw a 6 foot blow up penis in the crowd and a blow up doll.

There were a lot of babies around the age of one there too. The thing that killed me, from what I remember, those parents had to pay the full price of $150 for these kids to get into Woodstock.

By the time we got to the East Stage, food and drink in hand, we heard a couple songs by The Tragically Hip. Also, every once and a while you could smell nothing but hot dogs!

Next on was Kid Rock. He came out in a full length white fur coat with matching hat then someone took that off and he had on a red outfit and he put on a matching red hat. Joe C. was there too. During the last song Kid Rock played every instrument! It was a good show.

We got up to go to the bathroom and came back to see Wyclef Jean. He was awesome! He even crowd surfed! Counting Crows were next, again a good show. Then Dave Matthews and Alanis. I’m not much of a Dave fan, but Alanis was good.

At some point we had gone to the bathroom again and the Mud People were throwing mud at those of us trying to USE the bathroom. We had to walk behind the Port A Johns and then peak out to see if it was clear and run around to the front and use the bathroom. Then we ran back around to the back side and proceeded to walk back. Well there were “gaper delays” because a lot of people in front of us were watching the mud people. I was yelling for them to go or we were going to get hit and then BAM! My aunt got pelted in the side of the head with mud. OMG!! I started laughing so hard. I asked her if she was okay but I could not stop laughing. She was wearing a bandana so most of the mud was on that but EWWWWW.

Once we were in the clear we could watch the Mud People from a safe distance. There were workers driving these “gator” trucks and the mud people would throw mud at them as they drove through the mud field. The next employee who tried to drive through the field was doomed. There were TOO many Mud People. They grabbed onto the back of the “gator” and it just spun in circles as they pelted this poor guy with mud. Man, what a site. 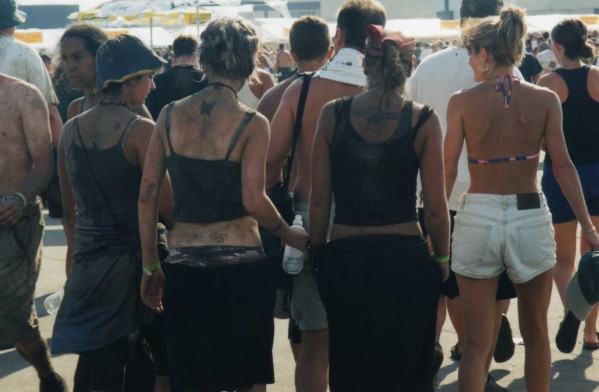 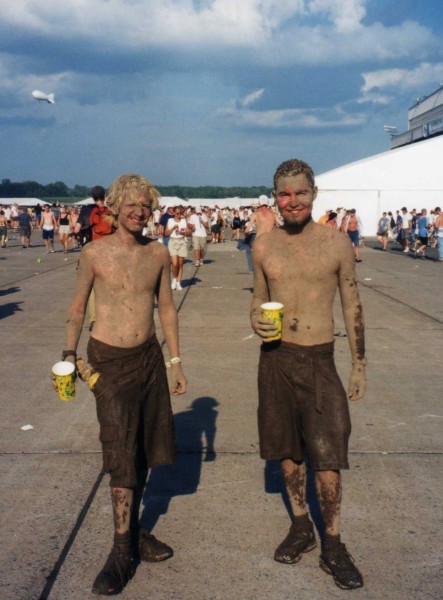 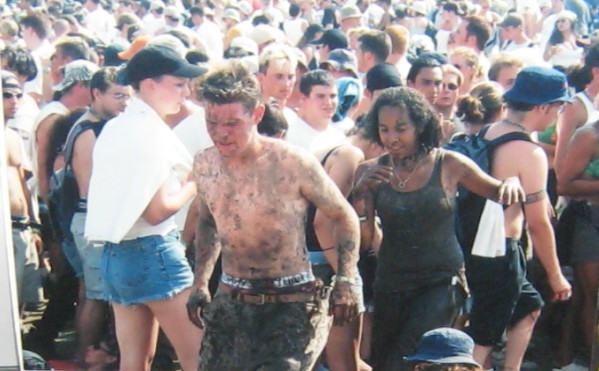 Off and on during various band performances the speakers had bad static or would not work at all. Eventually, they were fixed. There were a lot of people sitting on top of the semi trailers during the shows too. (These were the same ones that later caught on fire.)

Next band was Limp Bizkit. They promoted throwing shit and boy did the people throw it! That was something to see. Luckily we were far enough back and were not affected. Fred Durst also went into the crowd on a board ripped off of the wall surrounding one of the speaker towers. “I did it all for the NOOKIE!” and “I GOTTA HAVE FAAAAAAAAAAAAAAITH!!!!!!!” 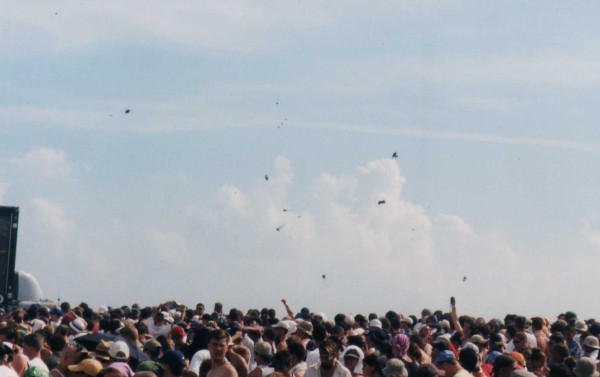 By the time Rage Against the Machine came on it was dark. They also burned an American flag at the end of their set. It was quite an interesting show.

Now, the moment I had been waiting for, METALLICA!!!

Before Metallica came on there was an announcement that a MAJOR storm was headed our way! “NOOO!” I thought, “I’m not going to get to see METALLICA!!!” High winds, hail and rain were predicted. We were also told to stay off the towers.

We were all sitting waiting for Metallica to take the stage. My aunt had pulled out a clear plastic rain poncho to wear and pulled her knees up to her chest, rested her head and sat there completely under the poncho. Some guys walking towards us stopped, looked at her and asked us if she was dead. We laughed and said no.

5-10 minutes later the announcer came back out, said that the weather place had called them and that we should only be getting the tail end of the storm, maybe 10-15 minutes worth and to STAY OFF THE TOWERS!

Metallica began their set and the winds started to pick up and the clouds swirled. It was wild. After a few songs Jaymz said something like, “If you guys are going to stay out here, we are going to keep playing.” (I don’t remember word for word, but that was the jist of it.) It rained for about 5-10 minutes and the storm passed! WOOHOO

They played for 2 hours, 17 songs, which included 3 encores. It was FREAKIN’ awesome! One of the best parts about a show at night? Seeing 100,000 people with their lighters in the air!

After Metallica’s 3 encores there was a 20 minute fireworks show. It was the best I had seen in a long time! View their set list here. 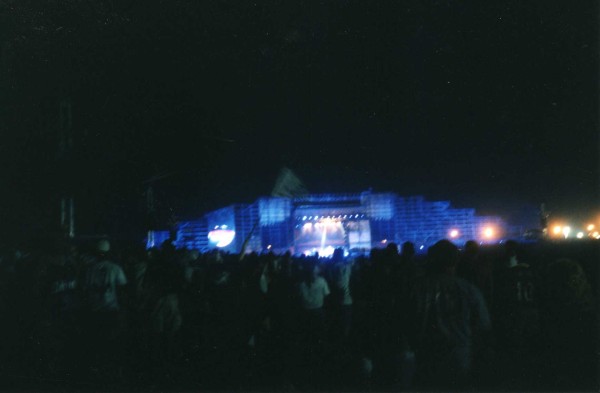 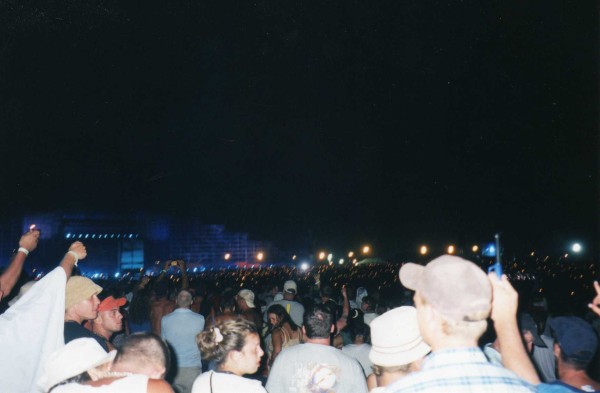 Get your lighters out! Or butane flames! haha 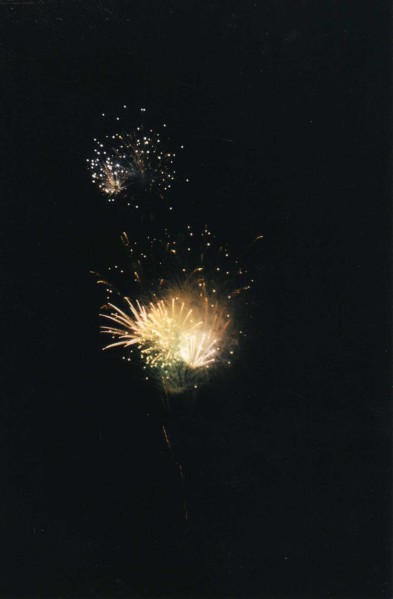 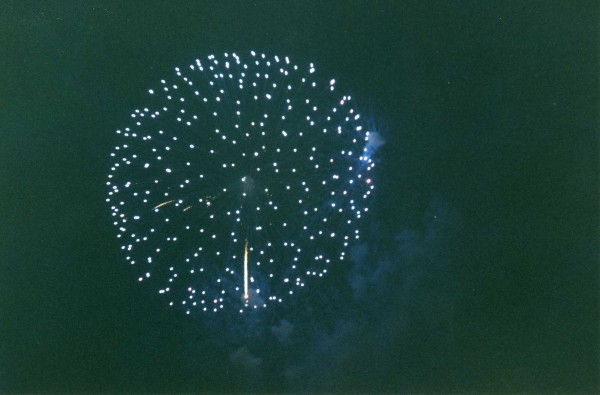 After the fireworks were finished we walked around some more and looked at vendor merchandise. At 1:30-2:00 a.m. we were hungry. We sat on the ground in Pizza Box Land (this one area of the field was just covered with pizza boxes) eating grilled cheese and drinking pop. Some people near us were bowling with pop/water bottles and someone got a strike! I also noticed words spelled or symbols in the chain link fence with pop/water bottles. 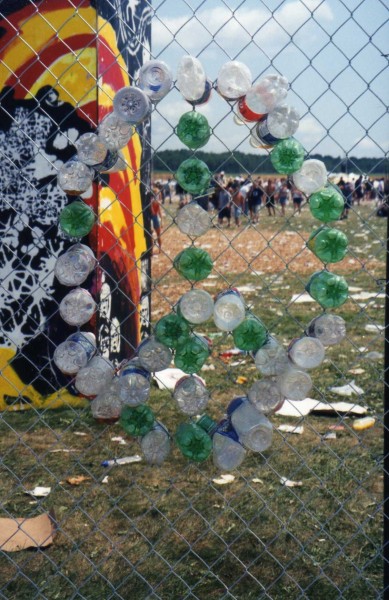 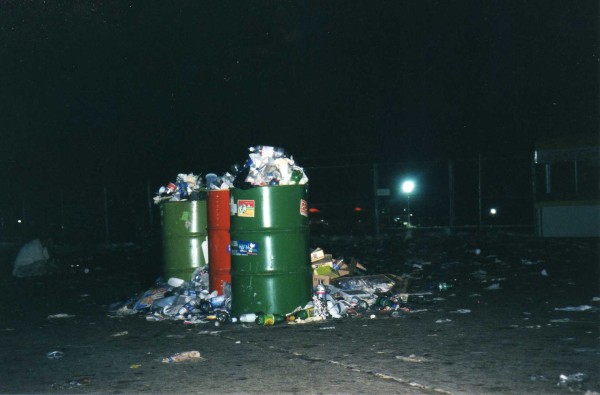 We walked past The Rave on our way back to the tent and this time Fat Boy Slim was there. Again, the garbage can people were still beating on the drums but this time there was a HUGE crowd around them and a couple of naked chicks were dancing on top of the cans.

In the camping area, there were mini fences all along the walkway by the tents. People wrote various sayings on them like: “Bob’s house —>” The funniest one I saw, “If you lived here, you would be home by now.” We were asleep by 3 a.m. 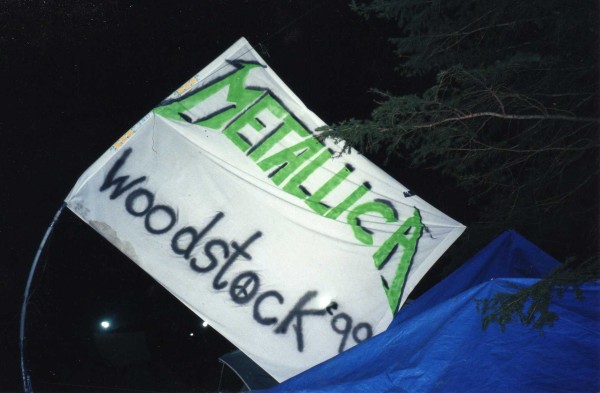 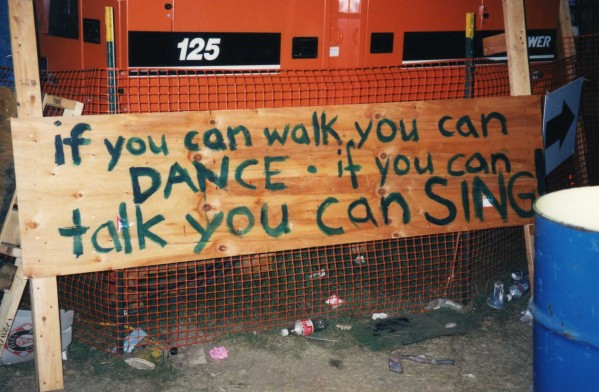