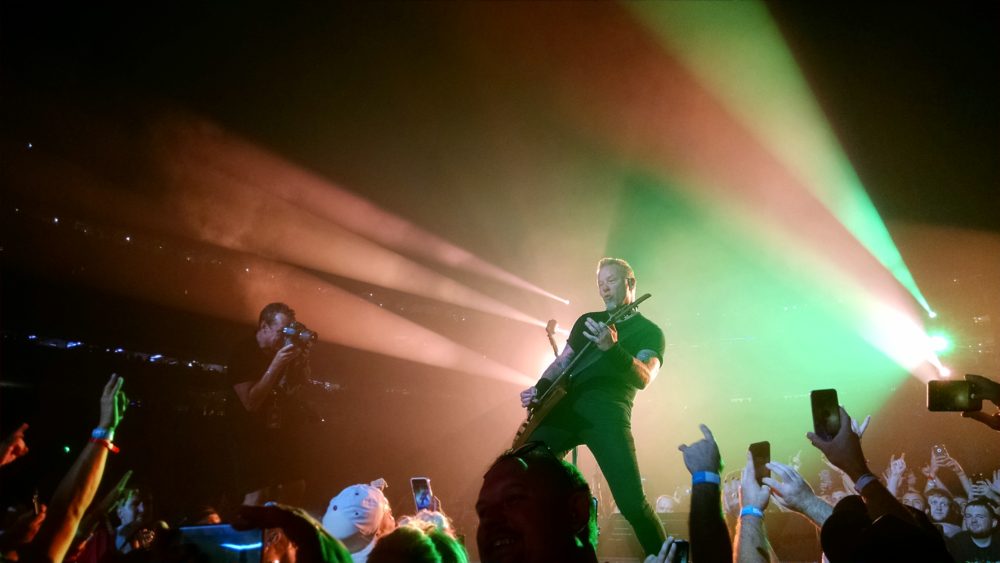 2016 was a pretty good year for music, well, in my opinion anyway. Let me first start by saying, 2016 brought a new Metallica album! What’s the big deal? It’s been 8 years since their last release! However, it was worth the wait AND…METALLICA was announced as one of the headliners for Rock on the Range in 2017! A miracle for sure! Now, while I keep lists like there is no tomorrow, I don’t normally make “Top” lists. Below is my combination list/best of/what was good in my world of music during 2016.

2016 albums on repeat more than others* (no particular order):
SIMO – Let Love Show The Way
The Virginmarys – Divides
Monster Truck – Sittin’ Heavy
Zach Lopez – Bloodlines
Royal Bliss – The Truth
Citizen Zero – State of Mind
Metallica – Hardwired…To Self-Destruct
Highly Suspect – The Boy Who Died Wolf
The Record Company – Give It Back To You
Green Day – Revolution Radio
*Not to say any of the other albums I purchased were bad, there was just something about these

Number of concerts I attended: 55 (Full list)
Number of bands I saw live for the first time (as headliner or opening band): 46
Number of festivals attended: 4
States other than IL I traveled to for a concert: WI, OH, CO, MN, LA
Band I saw the most in 2016: Royal Bliss (10)
Number of set lists acquired in 2016: 21
Latest addiction: SiriusXM Volume Channel 106 (music talk!!) Lucked out and got on the air the one time I called to talk about a cool experience at a concert. I told them about the time I got a wristband from James Hetfield at my 25th Metallica show. 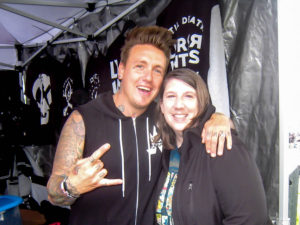 Jacoby from Papa Roach and me

Extra Special Shows… While I didn’t really see a bad performance from any of the headline bands I planned to see, the few below really stand out above and beyond the normal concert going experience.

February 26, Highly Suspect @ Double Door in Chicago, IL: It was my first time seeing the band (although I had known about them prior to their 2015 release, Mister Aslyum, I always had schedule conflicts when they came to town prior) and the first time, in over 800+ shows, that I had ever had what I’m calling an out of body experience. I don’t know how else to describe it. It was like time had all of sudden gone into slow motion but it was as if I wasn’t actually in my body. Fuck Me Up was a few songs into the set that night and it was during this song, that for a few seconds, I wasn’t myself. To paint the picture, I was jumping around and head banging by the time the song had gotten to the 1:07 mark in this song, and that is when it happened. Again, it didn’t last very long, but it is the freakiest thing that has ever happened to me. The closest thing visually that I could use to describe how I felt, is this slow motion part from the HBO show, Vinyl. The small section from 4:27 – 4:33 that shows the guy on the right in slo-mo is the best I got. I know this probably sounds incredibly insane, and honestly, up to this point, I’ve only told a few people and Johnny Stevens (lead singer), who replied with, “That is cool as fuck!” The only thing I can think of is that the feeling I was having over finally hearing their songs live had built up to such a euphoric situation, that my brain went into overload and caused the feeling I was having. *shrugs* 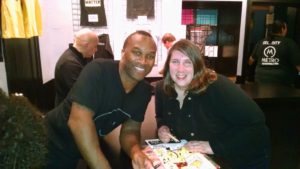 Joe Daniels and Me 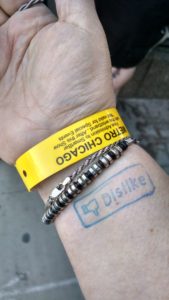 April 15 and 16, Local H @ Metro in Chicago, IL: Local H were going to celebrate the 20th anniversary of their album As Good As Dead with 2 electric shows and 1 acoustic show. Not only that, original drummer, Joe Daniels, would be a part of it as well. The first set would be with Scott Lucas and current drummer, Ryan Harding, the second set would be the entire AGAD album with Scott and Joe on drums and then the encore would have both Ryan and Joe on drums with Scott. Why was this such a big deal? The last time I saw Joe in the band was March 1999, (I must say, Brian St Clair and Ryan Harding were and are excellent drummers in their own right!), and honestly I, and I’m sure no one else in attendance at these shows, had no idea what they were in for. You can read about Night One, the afternoon acoustic and Night Two. However, the one thing that is visually burned into my brain is seeing “Cha!” Said the Kitty with Scott and both Ryan and Joe on drums. CHA! WITH TWO DRUMMERS! Cha! with two drummers totally in sync with each other. IT WAS SO THRILLING! Maybe it’s because it’s one of my fave songs or maybe because it was just that damn good, but all three shows were amazing and are what lead me to see this line up/set format “one more time” the night of Mother’s Day in Champaign, IL. Hey Local H, let’s do it again for the 20th anniversary of Pack Up The Cats!

April 26, Local H at Liar’s Club in Chicago, IL: This was my first “secret-ish” H show at Liar’s Club. Earlier that day I interviewed Scott and he mentioned they were playing a party, but the night would also be open to the public. Eventually a tweet from the band went out, but by that time I had already decided I was going. Also, it was a last minute decision to cover it, but I’m glad it worked out. 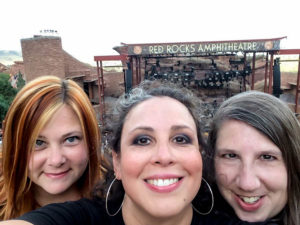 Jess, Kim and Me at Red Rocks

August 15, Disturbed, Breaking Benjamin, Alter Bridge, Saint Asonia @ Red Rocks in Morrison, CO: Three Words: Bucket List Venue! Spent a few days in CO to celebrate a friend’s 40th birthday and on our last night we all checked off attending a show at Red Rocks. Although, those stairs up to the ticket taker from the Lower North Lot about killed us. Aside from that and the fact that we walked back to the wrong parking lot after the show (Oops! My fault. I thought I had found an easier way back), it was an amazing view in an amazing natural setting and the bands were pretty good too! haha Apparently Disturbed felt it was good enough to release as a LIVE album this year! Which makes it even more awesome now. “I was there!” 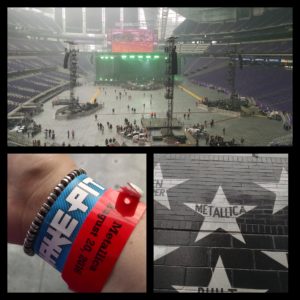 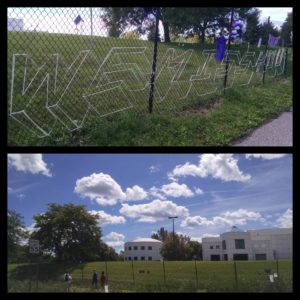 August 20, Metallica, Avenged Sevenfold, Volbeat @ U.S. Bank Stadium in Minneapolis, MN: Why drive to MN? Why not? The venue? The brand new Minnesota Vikings football stadium. Side note: Metallica were going to be the first rock band to play the stadium. I should add, my friends and I lucked out BIG TIME with this one as this show fell 4 days after we got home from CO. It had also been one year since I saw Metallica last and I could not wait! I lucked out and got a Snakepit wristband (first time for me getting Snakepit access) and saw the show from a whole new perspective. (Although, I’m still kicking myself for not bringing my DSLR even though I could have due to the NFL stadium rules. Oh well…). As a lot of people already know, there ain’t nothing like a live Metallica show and this one was pretty damn cool. It was SO GOOD to see them live again! We got the debut of Hardwired from their then forthcoming album, Hardwired…To Self-Destruct, and Creep, Bellz, King Nothing, Leper, Sanitarium, Puppetz, and Fade. Full set list here. Bottom line…another show that was well worth the trip! On our way home, we made a stop at Paisley Park to pay our respects to Prince who had died 4 months prior to the date. It was amazing to see all the tributes left in and along the chain link fence around the property. I even brought my own purple flowers to add to the collection. 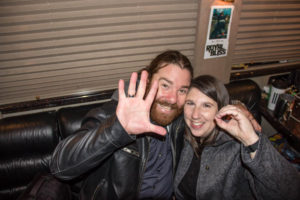 Neal Middleton and me

December 16, Royal Bliss @ Cavalier Theater in La Crosse, WI: My 50th RB show! Say what?! It was def a unique and wonderful memory I won’t soon forget. Read about it here.

Lastly, check out what I was up to during my second year with Moments In Sound.

Every year I discover new bands, see awesome live shows, purchase great music and more or less, keep music as much a part of my life as anything else. I’m really looking forward to what 2017 brings…you know, like those U.S. Metallica tour dates! Long live Rock ‘N’ Roll!