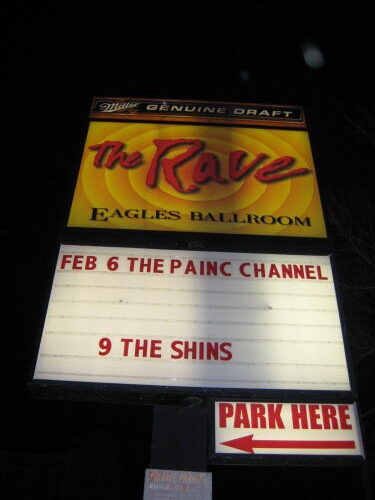 I got to The Rave in Milwaukee early since I had no idea what the crowd would be like. I spoke with a couple before the show while we waited for access to the actual room they were playing. Apparently he looked up to Dave Navarro as a mentor. He was a huge fan of Dave and his former bands but this was his first Panic Channel show. I told him Dave stood on the right. Once the doors opened they were able to stand right in front of him. I walked to the left side of the rail between the new bass player and Steve’s mic (where I wanted to be).

The crowd wasn’t at full capacity but the band played as if it was a packed house. Everyone there for the show was totally into them and seemed to have an awesome time. There was a lot of great crowd response too. However, Dave did seem a little reserved compared to Saturday’s show.

They opened with Left to Lose, went into Teahouse of the Spirits and then played the song Go On. Sometime during the first few songs, I was looking at Steve while he was singing, when he looked right at me, smiled and then did a small wave with his hand. I smiled back and gave him the devil horns. During the song, something else happened on stage (I don’t recall what) and I said something to Kim about it (yes, she was able to make it) and then I asked, Steve did wave at me, right? She laughed and said, YES! OMG! I couldn’t believe it. I mean, he HAD to have remembered me from the Rosemont show three days before, right? Otherwise, why else would he have done that? Funny thing, when Kim got to the venue, I wanted to ask her what the odds were that Steve might remember us but then I didn’t want to jinx it so I never said anything.

I looked away from Dave at one point in the night and then when I looked back he had a silver necklace in his hand. He put it on and I could see that it was a big silver cross on a long chain. I still don’t know where it came from! Maybe someone in the crowd gave it to him?

Then they played the following songs:

All of these songs ROCKED live! It was such a different show compared to Saturday at the Rosemont Theater too. Mostly because I was so much closer to the band. I don’t care what anyone says, being closer to the stage vs farther way TOTALLY makes the performance a different experience!

Before they played Why Cry, Steve looked at me and spoke into the mic. He then asked ME, “What show were you at?” I smiled, put my hands up to my mouth and yelled, “CHICAGO!” He then asked, “How far is that from here?” Me being me, I tried to yell back that I didn’t live in Chicago and that I actually only drove an hour. He and I went back and forth about 3 times but he couldn’t hear me due to the crowd yelling. Someone finally yelled out, “Two hours.” haha He then spoke into the mic and THANKED ME for coming to the show. HOW FREAKIN’ COOL WAS THAT?! OMG! UNREAL! I mean, when I spoke to him after the Rock Star Supernova show, it was THREE DAYS ago at this point. It’s just crazy that he remembered me. SOOO COOL!

I’m pretty sure Steve made random comments between all the songs I’ve listed so far but I don’t remember everything he said. At one point he asked the crowd (referring to those who lived in Milwaukee), “On a scale of aah to AAAAAH, how cold is it out?” Everyone replied with “AAAAAAHHH!!!” That was funny. He then made a reference to it being fucking hot on stage. It was pretty chilly on our side of the railing.

Since I was closer to the stage vs the RS Supernova show, I could really see the new bass player perform. He reminded me a lot of Flea. Steve was also SO into his performance that night. He had a lot of energy, emotion and character. I would say even more so than the Double Door show in 2006. Like I mentioned before, Dave was kind of mellow. Stephen however, was just the opposite. He beat the crap out of those drums all night and appeared to be having a great time.

I have NO IDEA which song this happened, but Steve left the stage (on the right side) and started to walk across the front in the area between the rail and the stage. He walked past a few people and then stopped in front of me. Because of the way I was leaning on the rail, my arms were already over the rail. He put his hand up and I put both of my hands over his , we shook and he mouthed thank you to me. I smiled and then he walked on down the line shaking hands with some, commenting to others and so on. Eventually he was out of site and back on stage on the left side.

Steve eventually introduced the band (Dave Navarro, Stephen Perkins), including the new bass player, Siggy Sjursen. Finally, the man had a name. (He was never introduced at the previous RS Supernova show.) Later on, a girl near me yelled to Steve between songs that she wanted to have Dave’s baby. Dave was side stage when Steve got his attention. As Dave walked to center stage, he commented that he was talking to a hot chic. Steve told him that someone wanted to have his baby. He asked who and Steve pointed to the girl. Dave then swung his guitar around to his back and put his hands palm side up and placed them next to each other and told the girl to do the same. Instead, she grabbed her boobs and pushed them up. Dave said, “No, put your hands like this.” She did and then he reached down into the front of his pants, as if he was digging around for “his baby” and then pulled out his hand and did a “just kidding” motion. It was pretty funny.

Before they played Listen, Steve commented that this was the last night of their solo tour and that this was going to be the last time they ever played this song and he hoped we enjoyed it. Of course, it was awesome.

After that, Steve sat down on the stage between his and Dave’s monitors and said, “You’re about to hear from a man who was born to do what he does.” Stephen kind of looked at him as if he was kind of embarrassed or didn’t realize Steve had planned to say that. Everyone left the stage and Stephen went into an awesome drum jam. (I don’t know how he doesn’t get dizzy the way his head moves when he’s playing pretty fast!) During all this, Dave was off to the side smoking while watching him. Siggy was reacting by moving his leg or foot or what have you and I couldn’t see Steve. When he was finished, he chucked his sticks into the crowd.

Everyone came back on stage and before they played Said You’d Be, Steve proceeded to talk about his thoughts on the war and asked, “Why are people being sent over there to die?” and other comments on Bush. I have always loved this song because of the music, but the other day when I was listening to this song, all of a sudden it dawned on me that it was about Bush! I don’t know why I never made the connection before! Last song of the night was AC/DC’s Highway to Hell and once again, they played it well. Siggy kept doing Angus Young moves. It was a riot and he was great at it!

They waved goodbye and Steve said they’d be back in a minute. Now, when I first got to the rail that night, I immediately noticed the bongos sitting in front of Stephen’s kit. I was hoping for an acoustic set like at the Double Door, but instead we got a one-song acoustic encore. The crew set up a tall stool for Siggy, a short stool for Stephen and a cabinet for his bongos to sit on and then a stool for Dave. Steve sat on the stage, feet dangling, in between his and Dave’s monitors. Steve commented that he didn’t understand the purpose of an encore but an acoustic song was a reason to leave the stage and come back out (due to the set up). He then introduced their song Outsider. Dave was playing his big white acoustic guitar and everyone sounded great!

The show was now over and they were all saying goodbye. Steve was standing on the other side of where I was and he looked down the rail and waved at me with his fingers more than with his whole hand. I lifted up both my hands and waved back with my fingers.

They all left the stage and I told Kim, “Let’s see if they come out side stage.” We were talking about the show when it hit me. I turned towards the stage and there was a guy up there. I yelled, “HEY!” while waving my arm to get his attention. He looked up and I asked if I could get a set list. He said sure and handed me one.

I put it in my purse and then noticed Siggy was standing in the crowd. I walked up to him, told him he was awesome and shook his hand. He said thanks and then walked over to the other side of the room where a group of people were standing.

We stood around a little longer and I noticed a lady who had been taking pics during the first three songs. I asked if she worked for the venue or on her own. She said the venue and that the pics would eventually be posted on the venue website, so yeah for that. Eventually security told us, if we didn’t have a pass, we couldn’t stay. We headed out into the freezing cold and I ran to my car so I could get my camera to take a picture of the venue sign out front. DAMN IT WAS COLD! I had to laugh when I noticed the bus. Why? It was ALL WHITE! I thought, “Well, it matches Dave’s white theme.”

So once again, another great night of rock n roll! I really hope there is more to come from this band.

*No cameras were allowed in the venue for this show